Going, going, soon to be gone

It's spectacular how quickly the snow is melting off. In just two weeks we've gone from over a foot in the flats to bare ground. 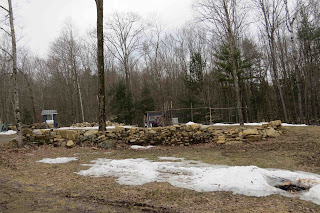 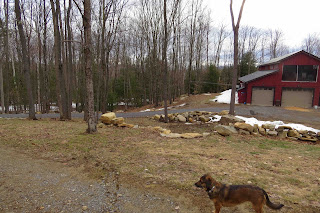 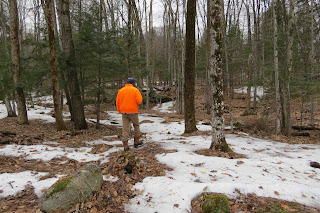 The driveway is holding up well but it's obvious we'll need to order stone again this year. I try to budget for a certain amount every year and I think we're going to have to play some catchup. Definitely some real mud holes out there. 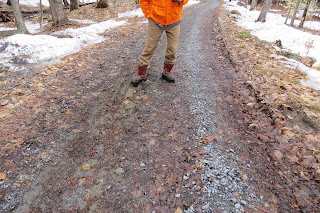 The streams are running bank full after a night and day of good rain. Cold temps in the late day means things freeze back up overnight and the runoff slows down. It's a great way to have the spring thaw happen - reduces the time spent in mud season.
We burned slightly more than average of our firewood. It was an early winter with snow hitting late October and temperatures staying wicked cold. December wood burning was more akin to February levels - three fires a day for a constantly burning stove load. Usually it's just a fire in the morning that we let die to coals, then another fire at night. Unfortunately, February was seasonably cold so lots of wood consumption occurred then too.
We're scrambling to finish those projects that seemed like we had all winter to do. Closet doors on the dressing area, pottery, sewing, weaving, building bee hives - great things to do while it's still cold and wet outside. Still, it'll be spring planting time soon. The garden is completely clear of snow and even the ground ice is thawing. Who knows, I may see garlic shoots coming up soon!

The chickens love getting out and scratching around. It was a bit cold out there but we managed to get all the way around the house. Plenty of time in the woods and I'm hoping they're eating lots of ticks.