Ways to use up eggs

The hens are laying like crazy so I’ve got to really work to keep ahead of production. So now we’re eating eggs two meals a day rather than just for breakfast. This could get boring fast.

Breakfast is now cold custard and toast. Four ramekins use one egg each but we only eat one ramekin per meal (we split one). I may need to start making egg rich breads to help this out.

Lunch is an egg scramble with veggies. This solves the added issue of what to do with garden produce and is a quick to prepare meal while we’re doing all the chores this time of year brings. It also adds variety since you can change up the flavors based on which vegetables or meats you add. I’m also thinking of doing some Asian inspired dishes like cabbage pancakes and tempuras.

Dessert, ah dessert, that’s where you can really shine. And use eggs. Lots of eggs.

The pecan pie uses four eggs and tastes wonderful. Unfortunately it’s also so rich that one piece is enough so it lasts a while.

The banana pudding is that Chef John recipe I mentioned earlier and has the added advantage that you can eat it for breakfast.

That’s still not enough to use up all the eggs but combined with some sharing I can just keep ahead of the hens.

Not your typical spring

We’ve had terrible weather this spring. Mainly because it’s been so nice. That’s right, I’m complaining about sunny days. I mean, there was that one freak snowfall that gave us over an inch of heavy wet snow, but otherwise it’s been incredibly dry.

Where are my April showers to bring May flowers? How is my beautiful garden supposed to fill with healthy veggies if we don’t get rain?

All kidding aside, the yard and garden are bone dry. And although the chickens enjoy the dust baths this is not good for anyone.

When we built the tractor shed in 2008 it rained for 8 weeks straight. We were soggy messes every single day. The creeks ran full and the mosquitoes were fierce. And every year since then we’ve had a little less rain. Dry April, dry May, and finally some rain in June. Not sure if this year will be a repeat but we’re already planning. We have two large rain containers set up to collect as much as possible. And we have another barrel that we may set up soon.

The forecast calls for rain for the next three days. Here’s hoping.

We have plenty of maple trees on the property but we’ve never tried to make maple syrup before. Well, apparently this was the year to give it a go!

The main reason we decided to try it was that Chris scored both a food grade barrel and a whole bunch of bricks. The barrel would let us accumulate the sap (we only had 5 sap taps/buckets and we had to borrow those) and the bricks would provide material for a quick and dirty wood-fired evaporator.

We had good collecting weather for about a week and managed to accumulate about 22 gallons of sap.

The weather was perfect: sunny, warmish, and barely breezy. I even brought Cooper’s bed outside so she could enjoy the sunshine with us.

We boiled outside for nine hours the first day, five hours the second, and three the third.

The chickens were loving being able to roam around at last. They’ve been confined to their coop and run because they hate to walk on the snow. The nice weather means they finally have a grass path to freedom. 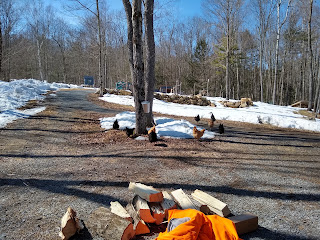 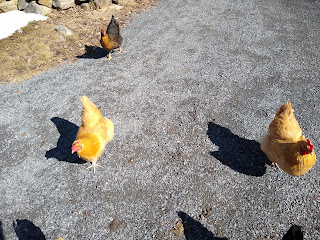 Once enough had evaporated we moved into the house to finish it off.
We ended up with a generous two quarts. That was our goal and I can’t believe we actually hit it! It’s not like we were carefully measuring anything. But I’d estimate we collected 22 gallons of sap so we at least have a target for next year.
I partially filled the jars because I’m going to freeze them. Well, some of them. We’ll be dipping into the first jar tonight. Waffles for dinner!
Posted by Cr at 6:09 PM No comments:

I spent a chunk of Saturday pressure canning dried beans.
I had six bags, each containing a pound of beans. I did three bags of pinto, two of black, and one navy. It was quite colorful.
After soaking them overnight I boiled the beans for 30 minutes. That gave me time to get my canner and supplies ready. 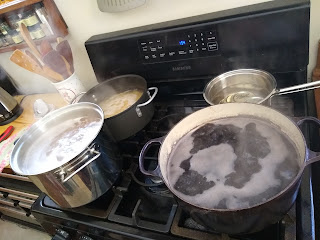 No photos of the filling process as I was wicked busy filling jars, getting them sealed, and loading the canner.
The beans were processed for 75 minutes. I needed to stay in the kitchen to keep a close eye on the pressure gauge so I had time to make pizza dough and banana bread too. Time management for the win!
I yielded 20 pints plus enough for a side dish from those six bags. Not bad.
Posted by Cr at 8:56 AM No comments:

Snugging in on a cold winter night

There is nothing more pleasant than snuggling in with the woodstove going full bore. The critters have it right.
Posted by Cr at 6:48 AM No comments:

Email ThisBlogThis!Share to TwitterShare to FacebookShare to Pinterest
Labels: The Cat, The Dog

I had three bananas that needed to be used up. Three is too many for my banana bread recipe and I already had bananas in the freezer so didn’t want to just chuck these in there too. Then inspiration struck—pudding! And not just any pudding. Southern style baked banana pudding with Nilla Wafers and meringue.

Except I didn’t have any Wafers and sure didn’t feel like going out. So I found a recipe online and away we go!

The cookie recipe came from iambaker.net. The first batch out of the oven hadn’t taken on any color at the end of the suggested bake time and additional time in the oven was just drying them out. So I increased the oven temp to 375 and baked 15 minutes, rotating the pan halfway through. This gave me a bit of browning on the bottom and edges which I think helps with flavor.

Do they taste exactly like the store-bought version? Of course not. Were they simple to bake and taste good? Yup! I’m counting this a keeper.

The banana pudding recipe is from my favorite online chef, Chef John at foodwishes.com. A wonderful recipe and it uses four eggs—an important consideration in this household since the hens are laying so well.

An excellent way to use up bananas and eggs. What’s not to love? 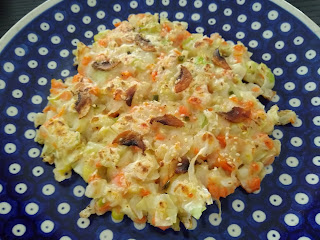 I found a recipe on YouTube for a vegetable pancake presented by Maangchi. It looked good and seemed simple. Unfortunately it didn’t come out quite right; it was sort of gummy in fact. Basically it’s 3 cups of veggies mixed with a flour/water batter to form a pancake. There aren’t any leaveners in it which may have contributed to the textural heaviness.

I fully intend to keep trying this because I find it wonderfully appealing as an idea—vegetables lightly bound and served with dipping sauce. I mean, I can easily see making something like this all summer as vegetables ripen in the garden. Quick, easy, good.

Well, we have some refining to do before it achieves “good”. But it’s close. I’m going to lighten the batter. Maybe add a bit of leavening. Shoot, maybe add an egg.

But I’ll be keeping the basic structure of simple, fresh, and quick.