Apple butter and apple sauce with my Squeezo

I've always wanted a Squeezo. They're just so usefully cool. I wasn't enthused about paying a couple hundred dollars though. And I don't know what garage sales everyone else seems to go to, but I have never seen one at a yard sale, let alone one for $5 (the same holds true for American Harvester pressure canners - nope, don't see those cheap either).

Anyway, Chris was browsing around eBay and found this beauty, made a bid or two, and ended up with it for $70 including shipping. It even came with the original booklet. Pretty neat.

Apple season finally rolled around and I got out my equipment. Handy pictorial in the booklet for assembly instructions meant it went together quickly and easily.

I used the Ball Blue book recipe for apple butter. Cooked the quartered apples in apple cider for 25 minutes and then fed them through the food mill - skins, seeds, and all.
With a bit of pressure and speed on the handle (I was turning too slowly at first) out came sauce on one side, bad bits on the other.
Then I started cooking down the apple butter. Um, yeah, I'd never made apple butter before and didn't realize just how long that would take. I actually started it in my regular stock pot then figured out that I needed more surface evaporation and switched to the dutch oven. Next time I'll do it in the crockpot (uncovered) and let it cook down all morning.
The apple butter finally cooked down enough and I waterbath canned it. The bit of extra that wouldn't fit in the jars got used immediately on toasted homemade bread. Oooh, really good.

Next up was canning apple sauce. Again, used the Ball Blue book and was surprised to see that you don't need to use a pressure canner to do apple sauce. Well, that makes things easier, doesn't it?
I steamed a half bushel of apples for 15 minutes and then fed them through the Squeezo.
One nifty thing about the Squeezo? You feed the trimmings back through the hopper and process them again. You don't get an extreme amount of extra pulp but certainly enough to make it worth doing. The apple sauce came out great and that completed my canning for the season. Next year I'll do tomato sauce too. Yum!

Chris wanted to try to bleach art on a shirt. Do we did some internet searches, found a recipe for DIY bleach-pens, and made some up. When we used it on some old clothes however it didn't do a darn thing. Not sure if the bleach was old (can bleach get old?) or if the shirts were beautifully colorfast. So we figured, why not dye some shirts and then bleach them, right?

I picked up some RIT dye and we got to work.

I had a cute PJ set with embroidery on it that I wanted to do something interesting to. So I tied it up in an unusual pattern and got to dipping.
All together we dyed 8 t-shirts and 1 PJ set. Lot of dying!
Then we chose one of the shirts and tried our bleach art again.
It didn't work. I guess the bleach was no good anymore. And unfortunately the dying didn't work either. We must not have followed the directions carefully enough (although it sure seemed like we did) because everything ran together and just turned various semi-solid shades of blue. Argh.

We're not giving up though. I went and got some red dye and we'll see if we can make some interesting and weird purple patterns. (In reading up on dying techniques I think where we went wrong was in not rinsing enough. It seemed like the water was clear but I'm guessing not).

Remember how I said the garden wasn't very successful this year? Well, here's some evidence.

I planted three potato hills. This was the first harvest:
Fortunately the other two hills, which I let go nearly a month longer, yielded a few more potatoes. I got enough to make lunch for us any way. And they were delicious!

The tomato plants finally started really producing as we got some hot weather in September. And I harvested those two wee watermelon.

Fortunately the watermelon were actually really yummy. Much more like the watermelon I remember from my youth - sweet, juicy, and chock full of seeds.
We also had some volunteer sunflowers. Love the design of the seed ring. 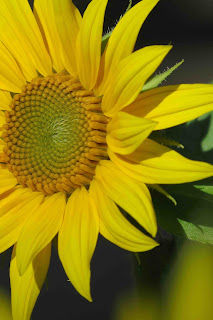 It's funny how much miscellaneous life goes on while you're doing big stuff. Chris is working on kitchen cabinetry, a pit greenhouse, and general house maintenance; I'm installing hardwood floors and keeping up with the usual housework and cooking.

We're also managing to enjoy all the other stuff that happens along the way:

Okay, so it's only 4 years, but it's our history so I'm sticking with the title. Chris has been diligently working on finishing my kitchen cabinetry and I'm going to do some posts on that soon. But I was looking through old pictures and realized that the kitchen has come a long way since we moved in. We've made many plans about layout, lived with improvements and additions, and changed those plans to accommodate how we really live and cook. It's been a true luxury having time and skills to make this kitchen our own.

Back in November of 2016 we officially began building the cabinetry. January 2017 saw the install of the antique kitchen sink. And then the last months have been spent building the rest of the cabinetry, making many, many drawers, trying out various ways of attaching silverware as drawer handles (that'll be a post - most of the methods failed and I've finally found one that truly works), and setting up the kitchen in general. I've now got tons of storage space and a really nifty cleat system that I haven't figured out how to fully utilize yet. As I said - many posts to come. But it's been fun looking back on where we've been.
Posted by Cr at 5:40 PM No comments: