What Chris did while I was gone...

In between building kitchen cabinetry and shoveling chicken poo, Chris decided to take a break and do something fun (and really, who can blame him?). Obviously this wall was just crying out for a special touch.

So he carefully removed the art work and attached a highly effective catchment system for drywall dust.
Then he cut a hole in the wall, lined it with wood, added trim the same color and design as on our interior window trim...
Added a gorgeous cherry shelf, and tossed up a few kitty treats.
T'BD quickly discovered the new spot. Especially since Chris put her catnip toy out there.
She can choose to go all the way out onto the shelf or hang out on the stair and just use it as a nifty window. Cooper can barely fit her head into the hole so no worries there. But if we ever get a bigger cat we'll be in real trouble.
Posted by Cr at 11:36 AM No comments:

Just returned from a 2-week trip to India. It was amazing! Although I have to admit I was a bit peeved that I left a snow-covered freezing February in NY for sunny India and it turned out we had a heat wave at home. On the plus side, Chris cleaned out the chicken coop for me. So really, a win.

The India trip was a bit whirlwind as we covered several cities and saw a whole lot of history. Delhi, Agra, Ranthambore, Jaipur, and back to Delhi. Given that most of these cities are 5 or so hours apart, we spent a lot of time looking at countryside on the way to amazing monuments and historic sites.

Delhi is quite commercial and modern. Although I did find it odd to see monkeys living in the trees and medians. Not a typical sight in the US. We were warned quite seriously not to feed them. In fact, not to even walk with food in our hand as they'd come and steal it. Quite aggressive, these monkeys. In addition to monkeys and shops, there are temples everywhere. And they are beautiful. One had a massive kitchen where two meals per day are prepared and shared with pilgrims, the poor, or people just wanting to get a meal. Run by the temple and staffed with volunteers, it was amazing to see.
In Agra we got to visit one of the three Red Forts. Constructed of red sandstone it is beautifully carved and preserved.
We also saw the Taj Mahal and its accompanying buildings.
Ranthambore has a huge tiger preserve where we were lucky enough to actually see a tigress. Given that a single tiger has an average range of 9 square kilometers and that no territories overlap, it was amazing that we were actually that lucky.

In Jaipur we got to experience an elephant ride that took us up the hill to the top of another fort and palace combo.
And Jaipur is also home to the Palace of Winds - a facade constructed so that the queens could observe daily life and parades without themselves being seen. 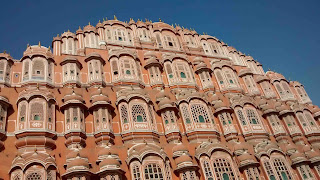 You may have heard of India's holy cows. I can tell you that cattle wander freely through city streets and traffic simply accommodates them.
And camels are still used as working animals! Not that common, but we caught a picture or two of them in harness.

In all, a great trip. My biggest impression? Sadly, it is to say that it's incredibly dirty there. A substantial amount of air pollution and soil erosion. Litter in the streets. Noise pollution from honking horns. Fortunately, they are working to correct these issues. For example, they've switched to woven bags instead of plastic when you make a purchase and are making strides toward green energy sources. Good to hear about some positive strides.