Conjunction of Moon, Venus, and Mars

Last night was a conjunction of the crescent moon, Venus and Mars. It was so cool! I don't normally pay a lot of attention to astrological occurrences, but this one was easy (no telescope needed) and the night was so clear, that it wowed us despite the sub-zero temperature. Unfortunately we didn't have out camera with us so couldn't take a photo (argh!).
If you missed it last night, you have another chance tonight. The crescent moon will have moved off, but Venus and Mars will be together. Look toward the west, a bit above the horizon, around 6:15pm or so. Venus shines so very bright and Mars will be a small red light just above and behind it.

Happy star gazing!
Posted by Cr at 9:03 AM No comments:

Chris is now dimensioning and planing the wood for the landing surround and wall boards. The work is cold (you have to do it outside), loud, dusty, and boring to photograph. So here are some of the other things we've been up to:

Testing a new recipe for Cook's Illustrated (don't be impressed, all you have to do is volunteer). I love this magazine and it's great fun to try out recipes before they're published. Plus you get to see how they changed from the trial once they actually appear in the magazine.

Figuring out a Pinterest inspiration - a pinafore. Obviously I didn't have it quite right yet as the straps are not the same length. I'm using waste fabric (an old flannel sheet that had holes in it) to create the pattern as there were no instructions. It's been a lot of trial and error and I'm learning lots.
Listening to Chris play out with his band. This gig was at a local music hall. I like how moody the photo came out (as opposed to being upset with my blurry photography - that's my story and I'm sticking to it).
Attending agility trials.
Finishing the mockup of the pinafore and showing it off (I'm such a newbie sewist that I really need the encouragement when I finish something!)

Destroying the house at 3AM as we help the dog and cat catch a mouse. Both animals had the mouse multiple times but apparently they've adopted a catch-and-release policy. Fortunately Chris believes in a quick kill and had the fireplace shovel to back it up.
Making soup and using my improvised lid vent. This was a Pinterest inspiration too and I got to use a cork from my absolute favorite wine for it. Works great for releasing steam.
Battling deep snow from the latest storm.
Bringing some sunshine into the house with key lime parfaits. And wearing the pinafore that is supposed to be just a mockup. Apparently I really like it. I did buy some linen to make the real one and wearing the mockup lets me know if I need to tweak anything (again - story, sticking to it).
Experimenting with homemade fire starter. Since Chris is planing down a bunch of boards we have plenty of shavings. I saved a cardboard egg carton, some candle nubs from the candelabra over the table, and am trying to make homemade fire starter. I'll let you know how it works out.
Unfortunately all of this has come to a screeching halt as Chris came down with the flu last night. High temperature and all. I'm nursing him along and hoping like hell that I don't catch it too. Let's hope my flu shot works...

That's all - just some pretty birds at the suet feeder. We have several kinds of woodpeckers and they really appreciate the suet all winter. 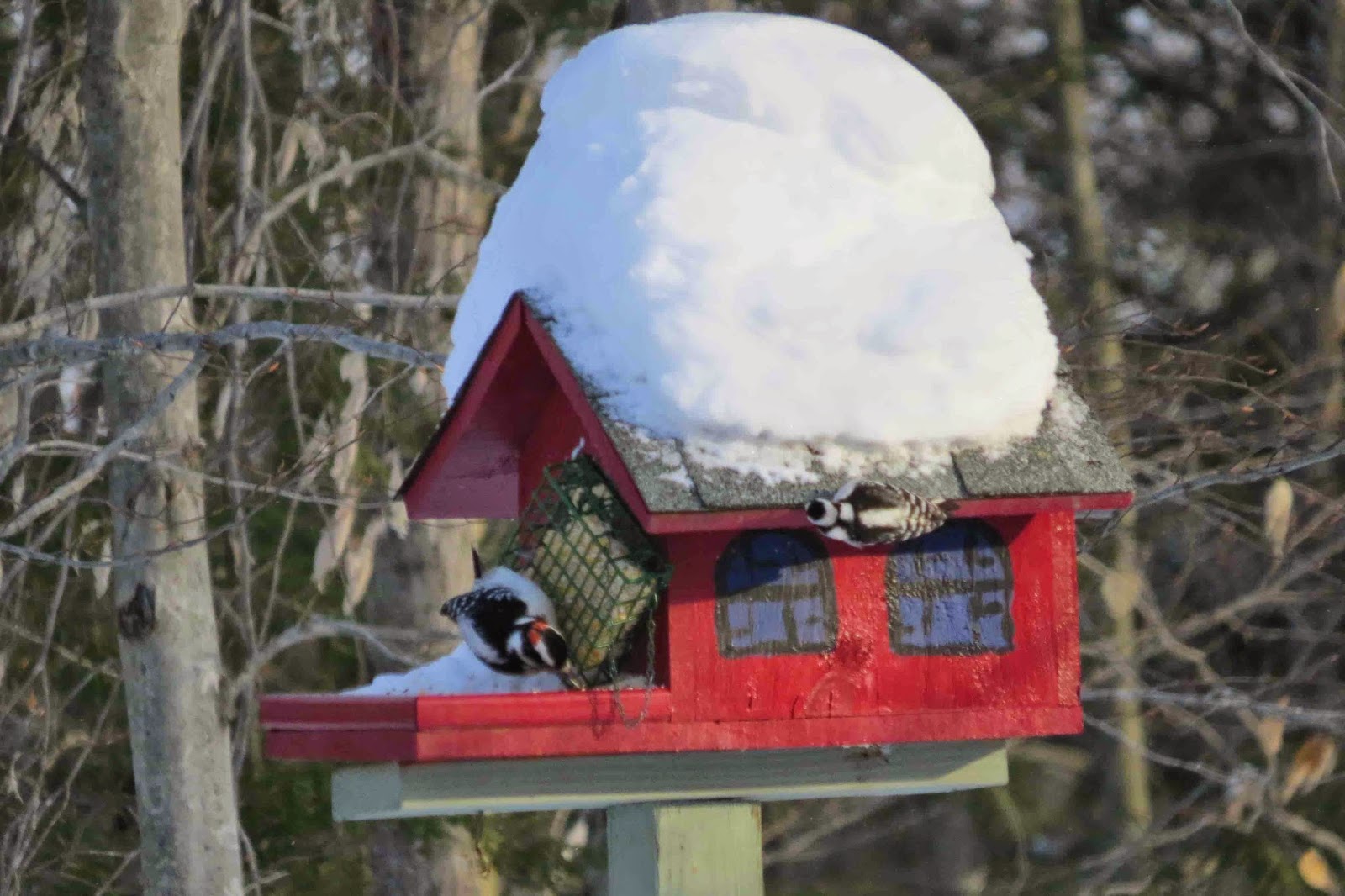 Email ThisBlogThis!Share to TwitterShare to FacebookShare to Pinterest
Labels: The property

And we have landing! A stair landing that is.

When last we left, Chris had finished the compass rose and was fitting the white oak flooring around it. This was a painstaking task but it came out great.

We put a light coat of stain and poly on it and then took a deep breath.
Why the breathing exercises? Because we (Chris) decided to do a copper inlay of an N for North and a ring around the compass points. But first he did a practice piece. We picked a font, figured out a good way to secure it to a board, and then Chris carved a channel for the copper wire.
Once the practice piece came out good, he had to carve the N into the finished floor. Very nervous making.
After carving the channel, he fit copper wire into it and then hammered it flat(ish). Then he sanded the wire to be flush with the floor. Sanding wire has a cool effect - it makes the wire sort of spread and fully fill the channel.

The effect is subtle but it looks great in real life. The copper just catches the light.
A couple coats of poly later, the floor is tough enough to wait for Spring weather for the final finish (that stuff stinks - better to wait until we can open windows for ventilation). Up next is the landing wall and built-in dog kennel.
Posted by Cr at 5:17 PM 4 comments: