Have you seen those posts on Pinterest that list all the foods that regrow from the roots? You know the ones - they trumpet "never buy X again!". Well, I decided to give bok choy a try. I had two heads that I'd purchased from my favorite organic farmers so I thought that'd be a good place to start.

Step 1: eat the bok choy. I did this quite successfully.

Step 2: place bottom stem into a shallow dish of water.

Step 3: wait. And wait. Eventually little leaves will start to form in the center.

Step 4: when they've begun to form little root tendrils, take them to the garden and plant them.
Cover the entire bulb with soil, leaving only the leaves sticking out.
Step 5: wait. And wait. And wait. Eventually you'll get all excited because it looks like it's actually going to work. The leaves grow and all looks well. Here's where things went awry though. Instead of heading up like bok choy is supposed to do, mine bolted.


Maybe it was too hot? Although given the wet and cold weather this summer I have a hard time believing that was the problem. The good news is that lots of little seed pods are forming so I'll be able to experiment with seed collection, storage, and planting. I'll let you know how that goes next summer.

As mentioned previously Chris enjoyed the pottery class so much that we decided to pick up an inexpensive kick wheel from Craig's List. Gotta love Craig's List!

A kick wheel is just that - a wheel that you manually kick to create the required spin. That generally involves a super heavy hunk of concrete or stone or something on the bottom of a post that's attached via some wicked good bearings to a plate of some kind.

Ours is concrete with a wood frame. We primed and painted the metal post, painted the plywood frame, and got potting.
There is obviously a heck of a learning curve to this thing. So far Chris has been showing me how to center the clay and it's way harder than I thought it would be. If the clay isn't centered properly your pot will be thicker/thinner on the edges and will wobble big time. The whole process has been fun and we definitely need a splash guard on the wheel! Chris also got a free treadmill off Craig's List and he's coming up with ways to attach the motor to the wheel so you don't have to kick it. Too cool.

Cooking - even when you mess up, it's often still yummy (Plum Jam)

Plum jam is a favorite of mine yet I've never made it. Well, actually I made it once, under the supervision of my Grandmother when she showed me how to make her version. Unfortunately her version was a freezer jam and my freezer is stuffed full at the moment. So I figured I'd just whip up a canned jam instead. Easy, right?

I used the instructions in the Sure-jell pectin package. Seemed pretty straightforward, chop the plums, cook with a bit of water, measure out the exact amount of fruit, add the pectin, boil hard, add the sugar, boil hard again, waterbath can, you're done.

My first problem was with "chop the plums". Their definition of a fine chop and mine differ. Unfortunately, mine wasn't fine enough so my pieces of plum failed to cook down in the 5 minutes specified. That's okay, a recipe at this stage is just a suggestion, so I cooked a bit longer to break them down. Since I now needed to measure out exactly six cups of fruit I realized that my chop size was going to impact how full my measuring cup actually got. A larger chop means less fruit to fill it (at this point I degenerated to a mental rant about canning recipes failing to specify weights). I decided to just pack the fruit into the cup and hope for the best. I had a lot of fruit left in the pan but I'd figure out something to with it later.

Added the pectin and started cooking to a rolling boil. My fruit is still too chunky without enough liquid to actually roll. It got there eventually but boy did it take a long time to release enough juice. In the meantime I kept mashing the plums with my spoon to help things along. I seriously thought about taking my immersion blender to it (and I probably should have) but I'd reached that stubborn stage where you just want to see how it all works out.

Added the sugar and finally got enough liquid so now things are progressing more smoothly. Rolling boil achieved, timed, and now ready to can.

The actual canning went very smoothly. I skimmed off the foam, filled the hot jars, processed, and everything sealed as it should. My yield, most likely because I had less fruit than I should was only eight cups, not ten. The jam was actually solidifying while I filled the jars (again, probably due to my pectin to fruit ratio) so no problem with set. The bit of extra jam left over was mixed in with the foam and stuck in the refrigerator. I'm happy to say it was fantastic lavishly spread on our breakfast toast.

Oh, and the extra cooked plums? Keep in mind that they were just barely cooked (10 minutes in the pot) and still quite firm. I spread them in a small baking dish, stirred in some cardamon scented sugar, topped with a sugar/flour/butter mixture and baked as a Plum Crisp. Surprisingly good.
Posted by Cr at 2:00 AM No comments:

More pics from the game camera

Yeah, right. Our deer blow, call, and stamp. They also love to pose for the camera.

Email ThisBlogThis!Share to TwitterShare to FacebookShare to Pinterest
Labels: Everyday living, The property

Have you ever noticed that when you're trying to find a "before" photo this is all you can come up with?

I went a bit further back and did find this one though. The back wall is missing the clock, the side wall doesn't have any paintings, and there aren't any curtains, but at least it shows the floor, right?

The point of all this is that I finally received the custom-made rug that I purchased way back in February when I was in India. It took them a full 5 months to hand tie the wool rug and I was nervous as all get-out that it wouldn't be as good as I remembered. Or rather, as good as I imagined since I didn't really have an example in exactly my size and colors. That's right, I got to specify size and color. No pressure, right?

When we got it rolled out, I was amazed at the depth of color and the feel of the wool. This thing is simply gorgeous. Kind of hard to photograph a rug that covers this much area, but this is about the best I could do.
It's a deep, dark blue with sage green palm trees. It fills the living room floor and pulls your eye so that the room looks wider. Nice effect and it feels fantastic under your bare feet. I can hardly wait to see how it feels when the floor heat is running this winter.

Email ThisBlogThis!Share to TwitterShare to FacebookShare to Pinterest
Labels: What's Inside

Chris finished his pottery class and brought home a wealth of new stuff. 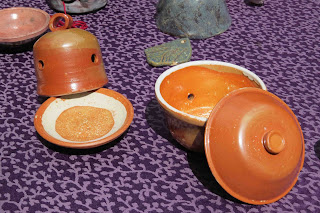 The class was great. Chris learned a lot about throwing pottery and decided he liked it so much we bought a kick wheel off Craig's List. He's now trying to teach me...I'm sure there will be many more posts to get out of that!