There’s always a lot going on this time of year. The transition from summer to winter is more than just the fall harvest. It’s a mind set, an attitude. Days full of putting up and and putting away combine with a new creativity. A realization that there are days ahead where you won’t have to carve out time to do something frivolous; that the weather will not only encourage, but demand it.
It’s a wonderful time of year.
Posted by Cr at 4:35 PM No comments:

I’m getting very little out of the garden now. The nights are quite cold (though no frost yet) and the days are more often gray and overcast. Even when we do get sunshine it’s a pale imitation of the summer heat.

The garden was a definite success this year with only one exception-the beefsteaks. I’m officially giving up on those. They just don’t seem to have time to ripen. Maybe I’ll do some Early Girls in the greenhouse instead since the cherry tomato I’ve got growing in there is still producing flowers and ripening green tomatoes.

I planted a lot of hot peppers this year and they came in nicely. I’ve canned jalapeño and banana peppers, candied some jalapeños, and dried a mix of various hots. I bought a seed packet labeled “Hot Mix” which gave me a good variety. Unfortunately I’m not experienced enough to identify them all. I won’t be doing that again!

The potato tower worked well. I got a decent yield and harvesting was spectacularly easy. I layered straw, soil, and potato starts for a total of four layers. Will definitely do this again.
The carrots really came in though the seed bunched up. I guess it was too light for the early season rain we got? Regardless, I got a good crop. 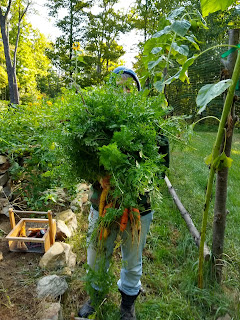 The corn did fairly well this year. It all came up strong but about a third failed to fill with kernels. I’m guessing it was the dry summer we had and I’ll institute a better watering plan for next year.

Mid-August I planted another crop of radishes and they’ve come in beautifully. Much better than the spring planting really. I’ll even have enough to pickle some. Yum!