And now for an update on all the small stuff that we do that doesn't seem to deserve a post of its own...

The berry bushes are fantastic this year. Full of blooms and the beginnings of berries. I'm hoping there will be enough to do some fun stuff like ice cream and maybe a jar or two of jam. Usually we only get enough berries to eat out of hand.

A friend gave us an odd shaped stump cutoff he found when cutting firewood. After some judicious sanding, shaping, and staining, we have art! Or the world's heaviest Rorschach test. After much discussion, we decided he looks like a dragon and is now positioned appropriately over the hutch. Don't see it (the dragon, not the hutch obviously)? Tilt your head left. See it now? See the eye? The snub nose? There you go!
We installed the baseboard trim in my project room and used the leftovers to frame the chalkboard. Finally! No one but us will probably notice but we think it looks much better. 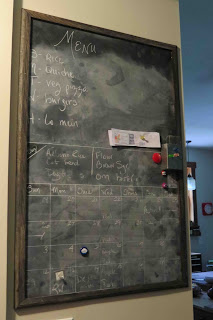 We've had some strange behavior from the hummingbirds this year. This little guy likes to sit on the porch rocker and, well, rock. For long periods of time.

We installed a huge mailbox so that our poor postman wouldn't have to drive all the way back to the house when we got packages. It's huge!
We planted a line of oak trees on the property line between our 4-acre and 25-acre lots.  Not sure how  many will survive as they are all wee little seedlings that came up naturally in the lawn and we moved them, but we figured it was worth a shot.
The kayak made it into the water (and my shoulder did just fine, whew!) and I saw this little bird in a nest built in a downed tree over the water. No idea what kind of bird she is but we ended up seeing several other nests built similarly along the river's edge. The whole time I was taking the photo I was scared to death I was going to drop my phone in the water. So the shot wasn't the best but I did get it and the phone survived. Win!
While trimming the future garden site (old cabin site) Chris came across some wild (?) roses. We assume wild as they were buried in bittersweet, weeds, and small trees but it's just as likely they were cultivated long ago and forgotten. We've been here 3 years and never saw them before. Unfortunately, he didn't see them this time until after he'd chopped them down (argh). Hopefully they'll recover but in the meantime I'm enjoying them in a vase. 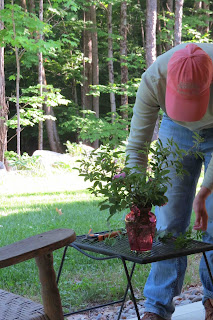 And finally, we fixed a water leak in the kitchen wall. The outside spigot for the east end of the house sprang a leak and I noticed the water coming in under the drywall. Fortunately it was a small leak and I caught it quick. Chris cut out the drywall, removed the insulation, fixed the leak, and then we let everything dry out for a week or so before patching it back up.  Now I wonder how long it's going to be before I stop looking over there every time I'm watering the garden...