Pictures of the temporary coop

Why temporary you ask? Because I'm extremely fortunate to have a good friend who is about to buy a house. A house that has a nice chicken coop. A nice chicken coop that they do not want! Which means that I get to ask more good friends to help me move the thing to our property. But the timing may be strange so I wanted to go ahead and get this one set up just in case I got chickens before I got the new coop.

The area looks like a bomb went off right now. We've been bringing in dirt and leveling the area. The goal is to make it able to be mowed. In the meantime, I've scattered all the old veggie seed that I had on hand and it's going to be a chicken garden. Meaning, anything growing there will be for the chickens. So far I've got peas, squash, and watermelon coming up. Not bad for 5 year old seed.

I wanted a small covered area over the pop door so that it would keep clear of snow. Since we'd already decided to get rid of the kindling crib (we use surprisingly little kindling so it's easier to just whack a few pieces when necessary rather than stocking it) Chris cut it down and moved it over.
In the meantime, I put down stick-on floor tiles to make it easier to clean the coop. 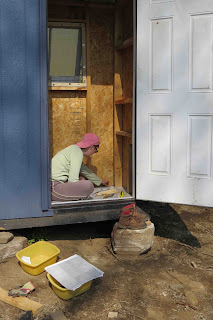 While Chris was on his adventure I got busy with the screw gun and the tree loppers. I made a ladder for the pop door.
Set up roost bars at various heights. None of them are directly on top of each other. Hopefully this will A) keep the hens from pooping on each other and B) make it easier for them to hop up to the highest bar. There won't be many hens in this thing so I've got way more roost space than really needed, but it seemed the easiest solution to just wedge branches in there.
I was originally just going to lean the old kindling crib over the pop door and let that be good enough for the short time it would exist. But the crib was so wonky and wobbly that I decided to build a new covering out of the parts instead. I also made it easy to remove.
Oh, and I decided to do some decorating. My poor husband has been trying to get rid of this ladder for years. Many, many years. I've saved it from the burn pile at least twice. The first time I saved it, he discovered I'd painted it and installed it in the camp for use as shelves. The next time, he found it was being used as a plant stand at the side of the house. And now, it's a decorative chicken coop item.
I buried a planter at the back corner leg, placed some strategic rocks, and planted climbers. Yup, eventually this will be covered with flowers.  And I banged together some bird houses and scattered them on the steps. They'll peek out so cute! 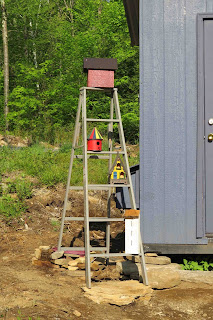 Of course it all looks a bit bleak right now. Until the greens come in and the flowers bloom. Then it'll be awesome. Right up until the chickens destroy it all. At least I'm realistic...