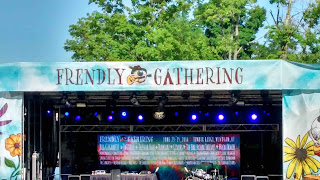 Last weekend we took a break from the property and went to a music festival in Vermont. The Frendly Festival (yes, that's spelled correctly - there is no "I" in Frendly). It's held at a defunct ski resort and I have to say it was the best run festival I have ever attended. And that includes the HOG rallies we used to go to. Well organized check in, parking, transportation from lot to festival, water provided, lots of port-o-johns, and a clear schedule. Totally unexpected given the free-flowing vibe you get once you walk in the gate.

It's rough camping on a ski run. Hunt around until you find a spot that doesn't have too much slope.

We picked a spot in the shade looking down at the big stage (way down).
The main band of the weekend was Twiddle. They played at least four times and various members often ended up on stage with other bands. It was great and gave everything a family vibe.
There was a different act every hour, at a different stage. That way no music competed with each other (the stages were pretty near each other) and the bands had time to set up.
There were food vendors, hydration stations (water, not alcohol - it was BYOB), jam tents (with instruments provided for use), and merchandise vendors (tie-dye anyone?). There were also games:  lawn bowling, Jenga, flip & pound hammer-strike, corn hole.
The festival ran all weekend and we had a great time. The bands were fun, the music was good, the crowd was energetic and friendly, and the whole thing was well organized. 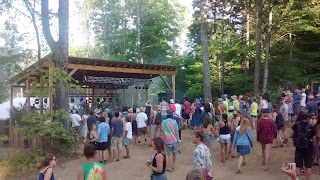 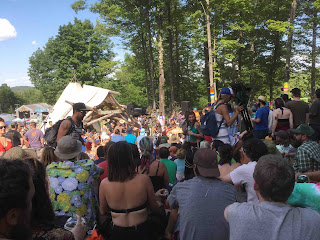 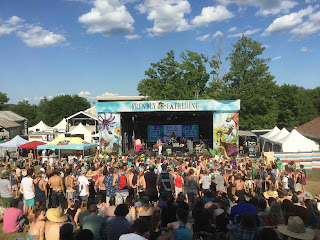