When we lost T'bd to a predator last summer we really struggled with the idea of getting another cat. But she was more than just a pet - she was an important part of the homestead. Specifically, she was an excellent mouser (and moler, and chipmunker, and unfortunately, birder). But since we didn't want to risk losing another cat, we held off. And then the mice moved in. Now, Cooper is an excellent mouse killer. But she doesn't have the patience of a cat. She's more a "see it move and kill it quick" kind of hunter. So we decided to get a couple kittens and have them be indoor only cats. Solve the mouse problem and solve the predator problem, right? Nope. Turns out Chris's allergies, which are fine with the indoor/outdoor variety of cat, went into hyper drive with permanently indoor cats. So we needed cats that were familiar with outdoor life but that we could train to come in at night. Enter a local shelter's barn cat program.

After some discussion, two cats - a 1-year old gray male and a 3-year old spotted male - came to the house. Chris immediately renamed them.
After a week of separation and gradual introduction to the dog (see the baby gate?) we integrated them into the household. This method worked beautifully. Of course, it helps enormously that Cooper is just a great dog.
After a couple weeks of being indoors so that they would imprint on us, we let them into the great outdoors.
It didn't take long for Satchmo to fully embrace the wild.
And he also embraced the dog. He looks scared in the photo below, doesn't he? Nope, two seconds after the shutter clicked he was running full tilt after the dog. They play chase, and Satchmo is typically the one doing the chasing.
Cole, the older cat, isn't as sure about this whole "outdoor" thing. Best guess is that he was a city cat, not a woods cat. He was very offended by the grass and spent a lot of energy making sure none of it touched his paws. Porch to rock patio to rock path to landscape timbers, okay. Grass, no. 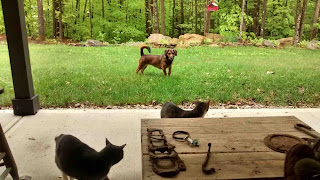 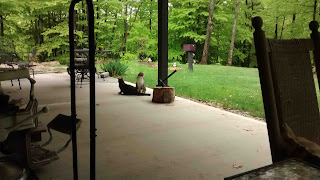 Their favorite place is definitely inside though. And they play with anything. Including baseballs and softballs. These are big cats! Cole weighs in at 13 pounds and Satchmo is nearly 11 (admittedly, his weight is a bit of fat).

They are kings of all they survey. 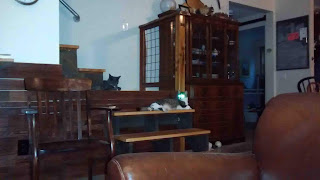 I'm extremely happy to report that it has been easy to get them in at night (so far). They come in on their own around 7:30, have their 8 o'clock freak out, and go to bed at 9. They sleep in the laundry room and get a final meal to put them to bed each night. I'd had doubts that we'd be able to get them to come inside easily, but I'm hopeful this trend will continue. Oh! and I'm also happy to say that Satchmo is fulfilling expectations on the hunting front - he's already killed two chipmunks. And he and Cooper show signs of being willing to hunt together. Nice!
Posted by Cr at 2:00 AM