Chris asked me to sew him some pants. I found a nice pattern "Men's Summer Pants" from WBM (Wardrobe by Me) and made up a muslin from some old flannel sheets. 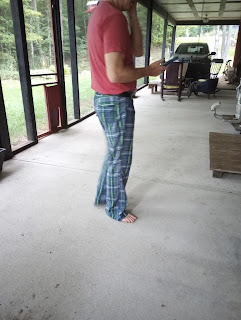 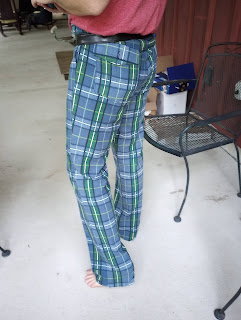 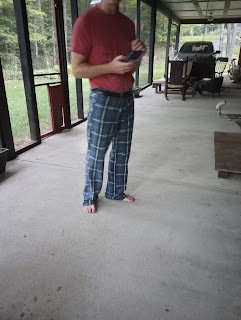 The muslin fit great so the next step was to pick a "real" fabric. The Fabrics-Store had some wonderful linen/cotton blend in their doggybag shop so I was able to buy a couple yards for a reasonable sum. The only downside being that it was bleached for dyeing. Which meant I had to get out the dye pot - not too much of a hardship I admit.
I mucked it up a bit. It was supposed to be a solid color (Timberwolf) but despite extensive stirring the fabric bunched up and created some organic shaped resists.
Fortunately Chris thought it looked cool so then it was just a matter of figuring out pattern placement so that I didn't end up with splotch marks in the crotch or ass.

The color is more accurate in that last photo - more of a deep gray/blue. I think I got the layout right. Won't really know for sure until they're sewn up and tried on. The good news is that I can always dye them again if needed.

Email ThisBlogThis!Share to TwitterShare to FacebookShare to Pinterest
Labels: Sewing