Our first time firing the kiln! So cool. Started it at 3pm Saturday, it reached Cone 6 temp at about midnight, and cooled to 130 degrees by 3pm Sunday.

These are the four prep bowls. They came out quite nice and I like the colors. We learned some stuff with this firing. We're brushing on the glazes as we don't want big containers of glaze sitting around the house. We got quite a few brush strokes especially on the interior. I think I made two mistakes - 1) I didn't let it dry well enough between coats and 2) I didn't brush on enough coats.

I got some interesting pooling in the left one but you can't see the swirl I added. The dots in the right one are just visible. I like the effect.

The travel mugs came out nice but we've got brush strokes again.
Aren't these adorable? I use bits of leftover clay to make pinch-pot animals. I've got quite a flock going (the pig suggests an expansion to full barnyard). The clear glaze slightly obscured texture. Sheep, pig, and ram are underglaze then coated in clear. The sheep at far right is Charcoal Celedon and White glaze. 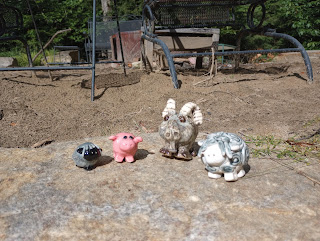 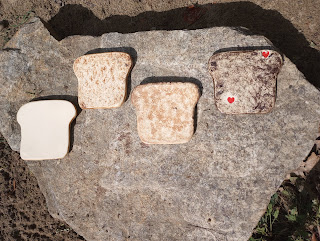 And this fine lady is a garden chicken. The bright colors are underglazes. They really pop! 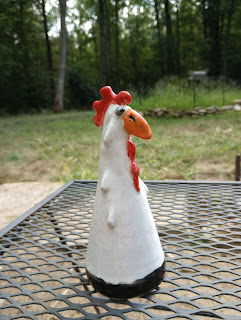 Here she is in her natural habitat. 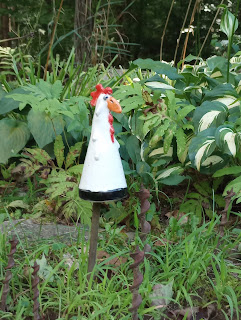 Here are the firing statistics:
Start at 3pm
Cone 6
No warm up
No hold
Top temperature 2228
Firing time 9.04 hours
Firing cost $3.40 (based on our electric rate of $.14 per kWh)
Total time load-to-unload 24 hours.
We've got more pieces ready to glaze so we'll get to make some improvements in technique and do some more experimenting. I particularly want to see what happens if you do an underglaze and then a coat of White glaze. Will the colors still show well? Look too muted? We'll find out.
Posted by Cr at 5:14 PM

Email ThisBlogThis!Share to TwitterShare to FacebookShare to Pinterest
Labels: Pottery