Our arrival in Cartagena was on a beautiful Saturday morning and we were greeted with music and cheering. Turned out it had nothing to do with our boat of course - it was their annual 50km (50!) run to all five forts around the city. Given the fact that the forts are all on hilltops this is one heck of a race. They deserved every cheer they got!

The port was very pretty and incredibly close to the old section of the city. A super easy walk and once you were there it was pedestrian only. I love when city centers limit traffic. 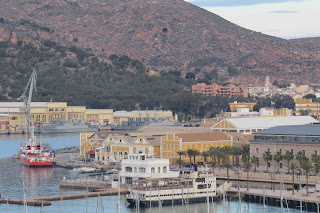 We actually paid for an excursion this time - kayaking the coast. And it was worth every penny.
The weather was great - sunny, cool wind, fairly calm water. We paddled for a couple hours, saw a wee jellyfish (it wasn't Man-o-War season yet), oohed and aahed over cliff formations, and... 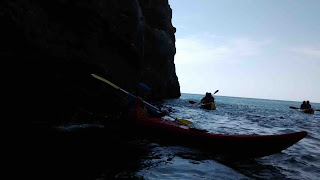 talked the guide into letting Chris climb a sketchy rope so he could jump into the water.
Much to my dismay I wasn't able to capture the actual jump (sorry honey!) as the camera chose that moment to give me trouble, but he had fun.

Back in the city center we saw pretty architecture. 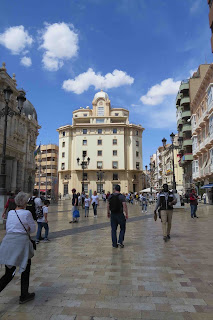 Ate fantastic tapas at great prices. If we decide to do another trip to Spain I think we'll spend the entire time in this city, eating good food. A glass of red wine, a cappuccino, bottle of water, half order of fried baby squid (chopitos fritos), and a half order of the mixed fish fry (fritura de pescado) came to 14 Euro for heaven's sake. I just wish we had some idea of how to actually eat some of the fish. So many bones! Do you just chew em up? Is there a trick to deboning something this small? We did the best we could and left a bony mess on the plate.
After lunch we explored some more and found an archeological dig site. While remodeling some apartment houses they dug down and found ruins dating all the way back to 3rd century BC when the Punic (or Carthaginian) people lived there. They were followed by the Romans who built on top of the Punic ruins. Basically this city has been continuously lived in for centuries and everyone just built on top of the people who came before. So cool. 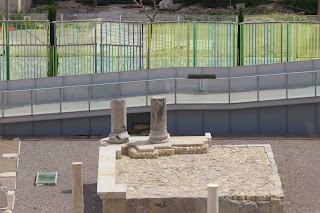 You can wander from ruins to pretty city streets with very little effort. It's a wonderfully walkable city.
We definitely wish we'd had more time to explore. We didn't go into any museums or shops. We did a bit of window shopping for shoes - so many shoes! (nearby Elche has over 1000 shoe factories) - and managed another sidewalk cafe stop for coffee. That included a local drink called Asiatico. Technically a coffee drink it consists of sweetened condensed milk, cognac, Liquor 43, and coffee. Very strong; very good. Definitely need some Liquor 43 - the golden elixir - now that we're home.

Next stop - Mallorca (or Majorca depending on your native language).