We celebrated our 25th wedding anniversary with a trip to Scotland in late October/early November. A few days in Glasgow followed by a week on the isle of Islay. The weather was rainy and cold (as expected) but the visit was full of surprisingly good food (don't believe the rumors of blandness) and wonderfully friendly people.

A popular item at tea is a hot sandwich pocket - bread and filling pressed in a hot iron that seals the edges. We used to make them over camp fires in cast iron forms. They have electric ones much like a waffle iron. The fillings were sometimes strange combinations and our favorite turned out to be banana and cranberry on wheat. Especially good with the strongly flavored tea.

Wandering around Glasgow was lots of fun and we went to museums, green houses, botanical gardens, parks, and kilt shops where they plied you with whisky (no "e" in Scotch whisky) while offering custom fittings. I said yes to the Scotch while Chris passed on the kilt.

In fact, Scotch was very much on my mind as headed to Islay. There are seven active distilleries on this small isle (with several more in the process of being rebuilt) and they offered tours and tastings. This is all single malt Scotch and it's wonderful.

My preferred whisky is distilled by Ardbeg and that's one of the reasons I chose this isle for our vacation. That and the fact that we could actually lodge at one of the distilleries - Bowmore offers housing in buildings that used to accommodate various workers or support businesses (distillery master, bakery, etc).

Ardbeg is extremely peat smoke-flavored and not exactly to everyone's taste, but I just love it. They are celebrating their 200th anniversary this year and the distillery is all gussied up for the party.


Note that it wasn't 200 years of continuous operation. It's only been 10 years or so since it's most recent purchase and it's been through many owners over the years. It was also shuttered for many years while the whisky aged in barrels in the warehouse (can you imagine?). But it's kept its same flavor profile throughout the incarnations.


Also on the island is Laphroaig - a very good whisky with a high peat content as well. The best thing about Laphroaig? It's marketing arm is fantastic. They let you "own" a square foot of their peat bog - you get a certificate with GPS coordinates and can borrow Wellies to plant your flag on it - and they pay you a mini bottle of Scotch every year as rent. The only catch is that you have to appear at the distillery to collect. 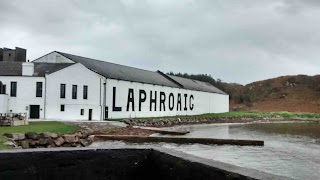 Not all of the distilleries have that high of a smoked flavor. Bowmore is much less peaty and the 12 year old bottle that they gifted us with was wonderful to sip on all week.

And Caol Ila is very mild. In fact, most of their production is sold as "spirits" to Johnny Walker rather than being matured to Scotch. 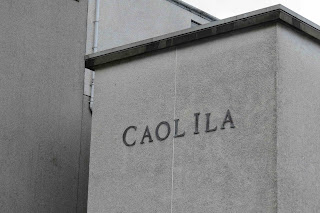 Of course it wasn't all whisky all the time. There were lots of cool ruins, walking trails, thrift shops, sheep meadows, and restaurants to enjoy.

We even found a textile mill that makes tartans and plaids for the movies and Saville Row. This gentleman designed the plaids used in Braveheart, Forest Gump, and a slew of other movies. He was wonderful - gave us a tour of the factory (one loom, minimal inventory, great shop), told us some history, and let us play with the fabrics. I confess I brought home enough to make a skirt (assuming I'm brave enough to cut into it).

We had a great time and I'd love to go back to explore more of Scotland. We didn't make it out to the Highlands or even up to Edinburgh. Maybe for our 50th? Nah, I won't be able to wait that long.