Yup, it was indeed a swing. And we swung! Chris was a bit surprised that I got right on, but it was awesome.


The guys got all the walls and sheathing completed so it was time to cut out the windows and doors. Matt and I had two reciprocating saws going and we managed to get most everything cut out in a day.


The South wall has the carport to garage door, then two living room windows that are quite large, the big French entry door, and then two kitchen windows (not cut out yet in this photo).
The huge blank space above will have window cutouts too. At the moment it's still sporting the fortress look. 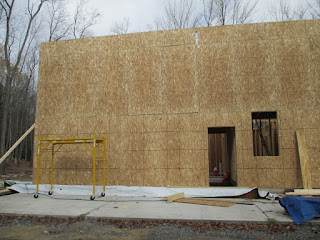 The East wall has four windows - two in the kitchen and two in the pantry.
Once we got all the upstairs windows cut out, it looked much more welcoming. Hard to look less welcoming as a big blank wall though. The super high windows will make much more sense once the trusses are on.
We're loving the huge East-facing bedroom windows. I'm already thinking window seats!
The buffet rock still looks huge and I still think it's awesome. The stone patio around it is going to look so nice!