The stairway landing has been finished since February. With the planer broken though we couldn't finish the boards needed for the stairwell and living room accent wall. Well guess what got fixed! So Chris got the rest of the joined white oak boards planed to the appropriate smoothness and size and we got to work designing.

First we had to decide if we liked the boards horizontal... 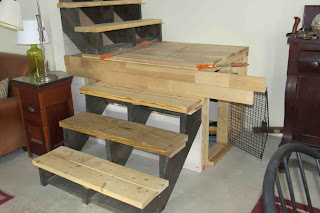 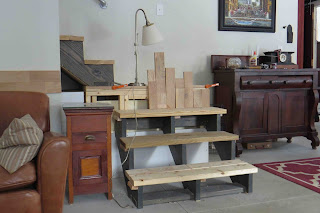 Horizontal won quite easily. Then I got to work staining them a wonderful dark brown (red mahogany to be exact).
The weather was quite changeable so we decided to set up the car port for the stain work.
Once all the boards were dry, I laid them out to get a feel for the pattern. Or rather, the lack of pattern. We had two widths of board - 3" and 1.5". I didn't want to accidentally end up with a clear stripe effect. The brain loves pattern and it's surprisingly hard to get a true random look, so a rough layout helped.
Then we moved the furniture and got started. The boards would wrap the landing and then travel across the living room wall as an accent.
We had to also design the dog kennel entrance. Cooper's kennel is under the landing and we wanted it to look finished and attractive.
The first run of board was applied in a level line (no matter how level you think your floor is, it isn't. Check it and run a chalk line) and that made all the rest of the boards easy to install.
We decided to stagger the boards where they met at the corners so they'd look like box joints (the woodworker's good idea). I'd stain them once we were done so they'd blend but up close they're a really cool detail. The entrance to Cooper's kennel was boxed and molded. We'll be adding a sliding barn door to finish it off.
And here it is! All enclosed and ready for the stairs to be remounted.
We mounted the stair stringer but had to put the temporary treads back on until Chris gets the real ones finished. They're going to be out of flame birch and I can hardly wait to see them in place.

I took advantage of the chaos to rearrange the furniture too. The living room is long and narrow and I didn't like how the traffic flowed. I also didn't like that it felt cramped. Now it's easier to walk through  (no more weaving around ottomans) and the room feels much bigger.

I still have a lot of art work packed in boxes. I'm waiting to get the window trim up before doing curtains and waiting to get the curtains up before selecting the art for that space between the windows.
I also still have a gap in the west wall art. I'm waiting to find just the right thing to go there. It's driving my brother crazy - he keeps looking to see what I'm going to come up with.
Chris's (unfinished) hunt board is now highlighted against the dark wall. That's on his list of fun-projects-to-get-done but I've commandeered it until he gets to it. I kinda like the open look, but he'll add drawers and cupboard doors to finish it off.
So there we have it. The living room is really starting to shape up. And we can cross another item off the construction list.

Next up: railings, treads, and dog doors.