This is the honking big septic tank that was installed last week. 1,250 gallons of wonderfulness. At least while it's empty. Once it's in use, it'll be 1,250 gallons of stuff I never want to deal with again. That's actually why we went with a large tank. 1 - it's what the architect engineered; 2 - it's big enough that we  can put in a garbage disposal if we want (we plan to use the chicken and pigs as our disposals, but it's nice to have the option); 3 - I will never have to put TP in the trash can. Ever. 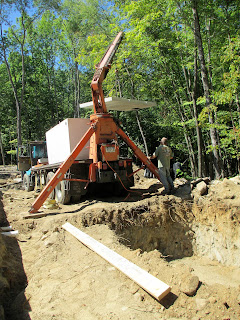 The septic guy arrived nice and early and had only mild trouble getting back to the septic hole. He asked if he could set the cap on the slab - fortunately Chris said "um, no. That's my wife's finished floor." So they set it to the side while they craned the tank into place.

I'm glad I wasn't there to witness the floor in jeopardy. These guys are awesome though and no damage was done.
They put a gooey sealant (so technical!) on the edge and put on the cap. Chris will work on connecting the septic lines next week.

I actually drove up after work Wednesday night to check this out. When we were looking for property we wanted to be close enough to work that we could easily commute. It took me 1 hour and 5 minutes at prime traffic time. Awesome!