Once the weather got nice it was time to put poly on the cherry drawers Chris had built so far.

The drawers in the stack by the stove also needed poly and also needed some help on the drawer pulls. My plan to use Loc-Tite to hold the antique spoons to the mounting bolts worked great all winter. Then summer hit and I don't know if it was the humidity or what, but the glue started to fail and the pulls fell off. Not all of them, but quite a few. So I needed to come up with a different mounting mechanism. I decided to try a two-part epoxy called JB-Weld. I also figured some extra attachment would be a good idea so I grabbed some jewelry copper wire and some embroidery floss and got creative.
The wire (or floss) wraps around the spoon and then attaches (or ties) to the mounting bolt. So not only is the spoon glued on, it's got some extra support from the wire.
I think the floss looks surprisingly good and mixes up the textures a bit. 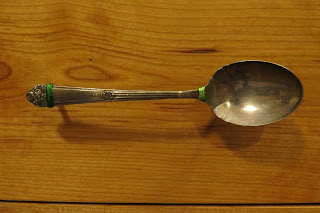 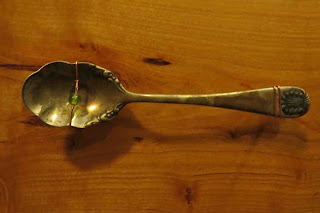 The drawers on the North wall are getting the same type of treatment. Note that the cherry here hasn't been exposed to light as long so it looks a lighter color than the drawers above. It'll all mellow out to approximately the same tone as time passes. 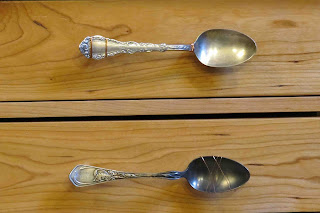 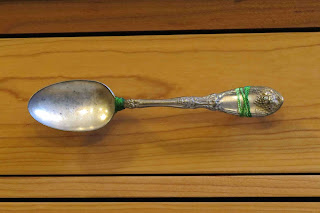 This stack is actually five drawers in total (one is out of the frame). I'll center long ice tea spoons on each drawer here rather than using two pulls on each one. There are two more stacks on this wall and one will be forks, the other knives. So I'll have full place settings on the North wall. Very fun.
Posted by Cr at 2:00 AM

Email ThisBlogThis!Share to TwitterShare to FacebookShare to Pinterest
Labels: Kitchen