Miscellany - including a garden update

The gardens have been in since Memorial day weekend and frankly they're not doing all that great. I lost several plants to something that was chopping them off about an inch from the ground. Then the little bugger would just leave the plant - didn't even eat it! The losses included two cherry tomato plants, one beefsteak tomato, a watermelon, and lots of basil. I put coffee grounds around the plants because someone told me that would help again cutworms and then someone else said that cutworms take the plant at ground level and that's not what I had. Whatever I had, it's gone now and I haven't lost anything else. Not sure if it was the coffee grounds or if I just managed to chase it away. I also lost a summer squash plant to a nasty grub that I quickly fed to the chickens. That was the only grub casualty. My cold frame was a complete failure - what few things germinated were eaten by something when the plants were just an inch or so out of the ground. Argh! Fortunately the second plantings have faired better and I'm hopeful for a decent harvest despite the issues.

In happier news, check out this guy! I had a hard time getting the shot as I was in the house when I saw him. Snapped a couple through the screen then tried to open the door but he took off as soon as he heard me. We've decided he's a blue bunting.
The goldfinches are still loving the thistle feeder and we have an incredible number of them.
My gladiolas bloomed for the first time in four years! Apparently they are finally in the right spot. 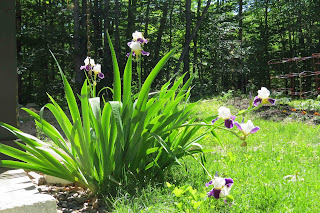 This is part of the front flower garden. I decided it needed some way to distinguish it from the yard a bit more clearly.
So I added a mini rock wall.
I think it looks great and I'll be building a few more of these along the rest of the gardens.
And we got a great shot of our resident coyote at the very back of our property. Isn't he gorgeous? And his coat is excellent for this time of year. We've been hearing sounds from a whole pack but only got a shot of this one. We've seen him before in the winter and his condition is still really good. 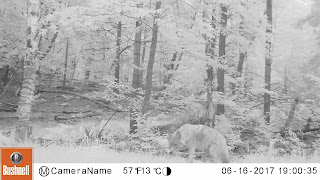