The first room that we want to have fully finished is the downstairs bath. We’ve been working on all kinds of temporary rooms – more for function than form if you know what I mean. And we’ve been doing really well with that, but at some point you have to actually start finishing rooms and we figured this would be the best place to start.

We poured the shower pan and let it cure. Then we started laying the mosaic stone tiles for the floor.  That went quickly and we were done with that step in a few hours. The floor tile went down much easier than we feared although it was a bit of a pain to cut the slate simply because the tiles were so small. We used nippers and a tile scorer to do the cuts at first but ultimately found that the tile saw worked best. Just had to be really careful with those itty-bitty tiles.


Once the floor was down we needed to let it set for 24 hours before walking on it and took the opportunity to visit with friends up at their sugar bush. Maple syrup is awesome and if you knew how much work went into making it you would realize that the price on the bottle is cheap! Wow, what a lot of effort. While there we got a photo of this little guy. A young weasel grabbing a fresh caught meal. Couldn’t believe the luck in capturing this picture! 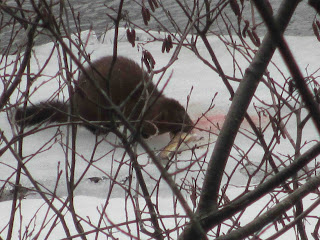 When we got back we tackled the wall tiles. Took a bit of planning as the floor was uneven due to the varying thickness of the stone. We finally got the first course laid and then it went very quickly. Working with 12-inch squares is really nice (our last tile job was subway tiles and those take forever to lay out). We had planned what the shower would look like: floor, tiles, mosaic border, tiles up to ceiling. But as we worked our way up, we realized that we had some different ideas that might look better than the original plan. This is what’s nice about DIY –you can change your mind mid-stream. Of course that’s also what’s horrible about DIY…


Anyway, we made some design decisions on the fly and we’re very pleased with the end result. The tile is laid and setting. We’ll tackle grout next and then the finish work around the windows and walls. It’s coming together really well and we’re far enough along now that we can make additional decorating choices about other parts of the room. Cool!