Spent the weekend at the Nest and got to check out all that got done last week. The porch footers have been poured, buried, and the floor has been filled and tamped. Supposed to do the floor pour this week!
The slab captures a great deal of solar heat and it's getting cool enough in the evenings that it's nice to lay on the slab and soak up the warmth. We stayed there until it got dark and then watched the stars. Great evening.
The hole for the septic tank was dug (obviously not by me) and the tank is delivering Wednesday.

The concrete is still very white and I'm discovering that some people pay high dollar to get the lightest color they can. We just got lucky I guess.
Spent a bit of time actually working before the family came over for a bonfire Saturday night: put down the moisture barrier (the white stuff at the edge is the leftover Reflectix that we had. Figured we may as well use it and maybe it will help keep the ice off the porch edge), cut down a small cherry that was too close the to the garage (small? 60 feet tall but only six inches in diameter - we have very tall small trees!), and some clean up around the build site.

Perfect weather and a few accomplishments - what an awesome way to spend the weekend.

Around the job site

Not much happening at the build site this week. The porch footers have been dug and inspected, the tubes have been placed and packed in with fill, and they are supposed to pour them soon. Then our awesome excavators, Skip and his son Eric, will come back to scrape the porch area and tamp down the fill in preparation for the porch slab pour.

Since we're waiting on other folks to do lots of work, we decided to figure out where the as-yet-unpurchased sawmill is to be placed and to start clearing the area for it and the drying racks. All of the exterior board and batten siding, interior wood siding, cabinetry, and upstairs wood floors will be cut from wood grown on our land. How cool is that??? But it needs time to dry so we need to buy the mill and get cutting. We picked an area that I wanted to look more park-like (rather than untamed woodlot, which is what it looks like now) and started taking down the smaller trees. Tiny trees and tree tops will be chipped, medium trees will become the supports for the drying racks, and big trees will be left to provide shade and that park-like setting I so want to see from our upper deck.
Posted by Cr at 10:19 PM No comments:

Email ThisBlogThis!Share to TwitterShare to FacebookShare to Pinterest
Labels: Site prep, The build

Of slabs and rocks

We opted not to dig a basement. We were very concerned that we'd run into ledge so decided to do a slab instead. We also decided not to dye the concrete for the slab. I like the color grey and didn't want to go with a brown shade (typically the more successful of the dyes) so we figured we'd just see what came out of the virgin pour.
What came out was an almost white color. I mean, blinding on a sunny day white. I don't seem to be able to get a good angle on it though, so this photo actually looks sort of light grey. Now, white floors were not what I had in mind. However, I'm also not thrilled with the thought of staining the slab as I've seen some really bad stain jobs out there. So we're going to live with it for a while. See if we like it. See if we even notice it once I scatter some area rugs around the place.

In other news, they've started digging the footers for the porch supports. And look what they hit:

A rock! A honking big rock. As in, couldn't dig that sucker out big rock. Makes me feel pretty good about the whole slab-instead-of-basement decision.
Cause I think we have finally found that ledge.
Posted by Cr at 7:39 AM No comments:

So, we have a well. Awesome. Now we need to get the water to the house. A minimum three foot deep trench is dug between the well head and the house. Hopefully you thought ahead and installed a water chase under the foundation so the line can come up into the house through the slab instead of having to come in through a wall (yeah Chris for thinking ahead!).

Note the flexible pipe in the bottom of the trench. At this point it's exposed and could get crushed if a rock fell on it. Since we'd rather not have that happen, we'll run it through a 3" pipe as a chase to the house.


Ran into a bit of trouble pushing the honking big water line through the chase leading under the slab. It kept catching on the lip of the elbow even though we duct taped the darn thing into rounded knob (no jokes and thankfully no pictures - it was a bit obscene).

We thought the elbow might have gotten knocked off the pipe by compression weight from the various cement trucks or when the backfill was being put in place, so we decided to dig out the backfill next to the foundation wall to expose the join. This was not a happy decision and we did much "shove the damn tube harder to see if it would go through" and "what if we used a flexible piece of Pex from the other end" before starting to dig.

Digging right next to your new foundation is not fun. Let's just say Chris is a dab hand at the backhoe and he did a great job of not knocking the foundation wall. We finished up with shovels (lots of digging in 90+ degree heat and direct sunlight) and found that the join had not separated, the tube was just being stubborn. So we took a break, came back refreshed, and maneuvered it through right at the elbow. Amazing how being able to see the join - and stick your arm into the curve to guide the line - makes a tricky job a bit easier.

So! Success! We have a water line and the pump electrical line now running into the house.

Got a slab too

They came to pour the slab last week and it went in fast.

We found out the reason for the door drop offs in the foundation walls. Since the cement floor is our finished floor as opposed to just a slab, it's to allow the cement to come all the way out to the edge for a finished look. Makes perfect sense once you know, doesn't it?

They smoothed the top with a bull float first.


Then they brought this beauty in to put on a polish. Slow moving fan blades swirl the concrete and raise the cream. Gradually it smooths the concrete and creates a good surface for the finished floor.


The chalk lines are coming off with a bit of water and scrubbing. Some of the chalk seems to be embedded in the concrete so we may have some on the finished floor but it seems to be scattered and I don't think it will bug me. We've decided not to put on a color stain and will simply seal the floor when construction is complete.
Posted by Cr at 6:19 AM No comments:

The well is in

We have a well! Happy to report that it came in about half as deep as we'd feared it would be. It went very smoothly and they did a great job getting it done. 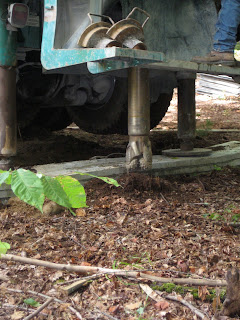 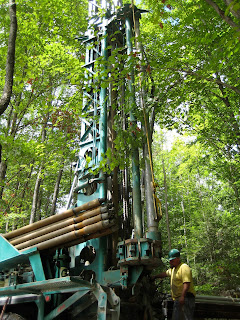 Getting water was nerve racking. You have absolutely no control of the situation and no choice but to go for it. Probably a good life lesson in there somewhere.

Chris and Matt laid the cement mesh and Pex tubing last week. We can confidently state that the Reflectix works - at least on sunlight. They felt like they were using those suntanning shields (and by the end of the day, they looked like it too).

Took a bit of effort to figure out the best layout (despite having done it multiple times on paper).

Ultimately they got 'er done. The slab gets poured next week. Woo-hoo!
Posted by Cr at 9:46 AM No comments: