Processing the second Hubbard & using up some leftover Butternut

This squash was much smaller than I'd realized, at least compared to the 24 pound monster that came before.

Same method as before: break it up, remove the guts, roast at 375, this time for 2 hours rather than one hour 45 minutes, and then puree.

Here are the stats:

As expected, with additional roasting I lost more water weight so the yield dropped. But the flavor! Got a bit more intense I admit and I think it will make awesome pies/bread/etc.

In other squash news, I also used some of my cooked, cubed, and frozen butternut to make squash cake. I found the recipe while rabbiting around trying to find ways to use the squash bonanza gifted by the garden and I gotta say, it's awesome. Use all the spices that are "optional". They really add to the complexity of the flavor. I did reduce a few of them to suit my personal tastes, but even the pepper added something nice.

And then I made pie

The next step in the great Hubbard Squash experiment was traditional pumpkin pie. I used the Libby's pie recipe since that what I've always used in the past. Since I didn't have a can of their pumpkin puree I found the recipe on their website. Easy.

And then I made the pie.


And it came out fantastic. Very light textured and great flavor. Chris and Dad both loved it. So I'm an official convert to the school of Hubbard. Long live the squash.

And here's a picture of the squash bread. See the dark caramelization at the sides? Fortunately it still tasted great and I'll make an adjustment or two when I bake to solve the issue.

I've still got the two other Hubbards to process and I'll be doing that next week after the Thanksgiving holidays. And Chris has made me promise to bake a squash pie a month so I should start making inroads on all that puree. I'll report back on whether or not freezing had any impact on the puree.

Wrapping up the garden & working on the pit greenhouse

The final tally:
Hubbard squash - 3
Butternut squash - 8
Kubochu squash - 3
Buttercup squash - 3
Tomatillo - so damn many
Tomatoes - scads (eaten fresh; cooked in galettes, tarts, salsa, and bruschetta; processed into pizza sauce and frozen)
Jalapeno - 8
Zucchini and yellow summer squash - more than it was possible to eat ourselves but we sure tried as galettes, grilled, frittered, and stuffed. Some got grated and frozen for use in meatloaf this winter. Oh, and much zucchini bread and double chocolate zucchini cake got baked (and eaten) too.
Cucumbers - enough to eat fresh, make two pints of dills, and share with Dad. Not many but what we got tasted great.

Then it was time to put the garden to bed for the winter. I decided to use the "Ruth Stout" method which basically means putting down thick layers of hay or straw or leaves or just about anything else compostable and then letting it lie there all winter. In the spring, you clear away the layer, plant the seeds or seedlings, tuck them in, and ignore them all summer. Now, the odds that I'll actually just leave the garden alone all next summer are right up there with winning the lottery so we'll just say that I put down a heavy layer of mulch and leave it at that.

The greatest thing about this was that we'd gone to my favorite local feed store to buy pellets and hay bales for the chicken coop and just happened to ask if they had any spoiled straw/hay that they'd like to get rid of; and they did! We got two truck loads of free hay and straw bales that I happily used to layer on both the main garden and the kitchen garden. Woot!

Chris has also been diligently working on the pit greenhouse. He'd gotten started on this quite a while ago, but then life happened and it took a backseat to, well, everything. But much progress has since been made.
The only part that existed prior to all his hard work was the tall back wall and the stairwell.
Actually, even the stairwell needed work as the many of the treads were missing. Where on earth huge slabs of stair tread could have gone is anyone's guess, but they were definitely not there.
He's actually gotten a lot more done - the new walls are nearly level with the original wall and top of stairs now. I'd show a photo but it's covered by at about a foot of snow. Yes, we're already getting lots of snow and it's definitely not melting off.

Still lots to do here but I figure I'll be able to use it by end of summer to do some late fall/early winter gardening. Greens! In October!

How the "pumpkin" bread turned out

Great, that's how. I did notice that the batter was a bit more liquid than when I use commercially canned pumpkin. And that carried over in how it baked - it took longer to cook all the way through, which meant the outside came disturbingly close to burning. It didn't, but it is tougher and more carmelized than I would have liked.

For the 11(!) bags of puree that I have in freezer right now, I'll just make sure I account for that in future recipes. For the pumpkin bread specifically, I'll use broader/shallower quick-bread pans rather than my standard loaf pans. Spreading out the batter should help it cook more evenly.

For the hubbard squash still to be processed, I'll roast it longer to get even more evaporation.

So, that's that. For anyone interested in the pumpkin bread recipe, it's from my recipe card file, which means its origins are a bit murky. As best I remember, it came from a co-worker in Louisiana who got it from a sorority sister in Maryland who got from...no one can remember. So, thanks to that original someone! It's a great recipe and actually gets better when you freeze the loaves.

These freeze very well and seem to get even more moist when later thawed. Enjoy!

I harvested three Hubbard Squash from the garden - two monsters and one that is only not a monster in comparison to the other two. Yesterday I decided it was time to process the first one.

Since I felt it was way to big to just cook and eat, I wanted to come up with some processing alternatives. Lots of discussions with friends and family turned up stories about how "Grandma (or Great Aunt Alice or whoever) would hack it up with a hatchet, roast it, and turn it into the best pumpkin pie ever". Okay, that's what I'll do too; puree it was to be. 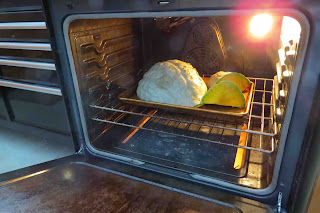 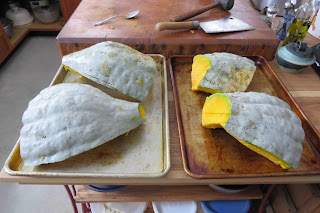 I roasted it in three batches. Oven set to 375, each pan took about an hour and 45 minutes to get nice and soft and flavorful.
I let the sections cool for about 20 minutes and then scooped the flesh into the food processor. The shells scraped incredibly clean with very little waste. A bit of buzzing, a bit of stirring, and voila! I had puree.
Since just about every recipe I have calls for a 15oz can of pumpkin, I divided the puree into 15oz portions and froze them.
I kept out two bags so I could make pumpkin bread and pumpkin pie this week. In fact, I've already got the pumpkin bread in the oven as I type. I'll let you know how it turns out. This is a recipe that I've made many, many times so I figured it was my best bet for evaluating flavor and texture.

I was a bit surprised at how low the yield actually was. I didn't expect to lose half the squash's weight. I'll test those results when I process the other monster squash - it's about the same size as this one was.