We were very sad that our first hive failed. Discussions with bee folk suggest mites as the culprit but we don’t really know. We’re going to do more frequent mite tests and see if we can keep this hive going.

Activity always brings everyone running.
We didn’t let everyone hang out too long. Once Chris actually started getting out the frames we shooed away the cat and chickens.

It only took a bit of buzzing to drive both me and the dog far away. Soon more pictures of the transfer. Chris reports the all went in just fine and we’ll give them a few days to establish as home. It’s great to have bees again!
Posted by Cr at 6:54 AM No comments:

Email ThisBlogThis!Share to TwitterShare to FacebookShare to Pinterest
Labels: Bees

With the garden pasture complete I can now easily lock the big chickens out of the fruit pasture. Which means I can let the chicks out to explore without worrying about them being harassed. I won’t be integrating the flocks for many weeks yet but this gives yet another opportunity for the flocks to safely see each other.

The first out was the barred rock. She wasted no time leaving the run and coming to see what I was doing.

Then she called the others.

A few pecks on the ground...
And everybody came running.

I stayed nearby to keep an eye on things (cats, dogs, chickens, hawks, oh my) and they had a grand time exploring and tasting everything they could reach. After about 20 minutes they opted to settle down back in the run and I closed the pop door.

Statistics and goings on

The US is over 100,000 Covid-19 deaths. I can’t even. I won’t be regularly updating those stats anymore. I had wanted to keep a kind of personal record so I’d remember but I don’t think there is any danger of forgetting.

The Bridge is done! We got the permanent railing and the screens up. It is definitely darker in there with the screens but it’s also now bug-free so I consider it a win. We’ve been sitting out there for blackfly free lunches and mosquitos free evenings.

While Chris had the extension ladder tied up he figured he may as well re-stain the soffits as they were starting to fade in the sun.
Here you can “see” the screens top & bottom. And my twinkle lights! 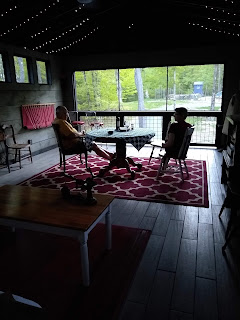 My oven started taking forever to ignite and the temperature would fluctuate. That’s my signal that it’s time to change the glow rod. We do this every 4 years or so and the oven is working perfectly again.
I got my first rhubarb harvest. I’ve got many rhubarb recipes pinned but was only able to harvest enough for one...so I chose The NY Times rhubarb custard bars. They came out fantastic.
We also got the fence around the garden finished. This area serves a dual purpose, keeping deer out and giving the chickens a second pasture. I’ll now be able to start grass growing in the old pasture again.
The garden is in except for onions and potatoes. They’ll get planted today. I put a mammoth sunflower next to every fence post and added cages to keep the chickens away until they are established.
Weather has been all over the place. Super hot and sunny (89 degrees!), then humid and thunderstorms, and today it’s 45 degrees out there at 6AM. At least there’s no snow.
Posted by Cr at 6:25 AM No comments:

Of cats and chipmunks

Our cats are excellent hunters and are averaging 4 chipmunks per day. Unfortunately that’s 4 caught per day, not necessarily 4 killed. See they, much like many cats, prefer to torment their prey rather than cleanly dispatch it. Luckily Cooper the dog is quite willing to serve as executioner. This becomes particularly important when the cats decide to bring those chipmunks home.

And I don’t mean to the front door. I mean into the house. Like yesterday for example. I’m on the front porch sweeping up when I hear the sound of a cat meowing with her mouth full.

Never heard that sound? It’s distinctive. Makes me jump right up and run to shut the door. Sadly, I’m nowhere near as fast as a four-legged feline. In she goes, live chipmunk hanging prominently from her jaws. I run in right after her, calling very urgently for Cooper because that cat is no sooner three feet into the house when she releases one very motivated chippy. It darts deeper into the room but Cooper executes an impressive snatch and grab before it has a chance to really make any progress.

I tell Coop “outside!” and worry not a bit that that’s the end of my problem. Can you see this coming?  This is where I make my big mistake. Instead of following the dog outside to praise her, I chastise the cat...and Coop comes running back in to see what I’m doing, chipmunk in hand, so to speak. And then she releases it. Because obviously I want it inside, right?

Now I’m yelling, the cats are watching, and Cooper is running around nose to ground trying to track the darn thing which has escaped into the closet under the stairs. The very deep, very full closet.

Chris soon joins in the mayhem and we’re now all involved in trying to outwit the wee beastie. Stuff is moved, the dog alerts on a box of Christmas decorations, and BAM, she’s got it! “Outside! Outside! Oh my God she’s dropped it!” “Just kill that fucking chipmunk!”

Email ThisBlogThis!Share to TwitterShare to FacebookShare to Pinterest
Labels: The Cat, The Dog

I transplanted the cabbage, kohlrabi, tomatillos, bachelor buttons, nasturtiums, and marigolds. The sunflowers are ready but I’m not...need to finish the fence so I can plant them at the base of the posts. I also direct sowed my herb seeds as well as carrots, cucumbers, and zucchini. I still have cuke and zuke starts but they need more time to grow before I put them out.

The chicks are growing well. They are now 7 weeks old and getting brave. They’re venturing into the closed run now and are able to get up and down the ladder okay. Their coloration is pretty and I think the Black Sex-links are going to more closely resemble Bunty rather than Tso. The Barred Rock of course stands out as it’s the only one of those I have. Still not sure if it’s a hen or roo. 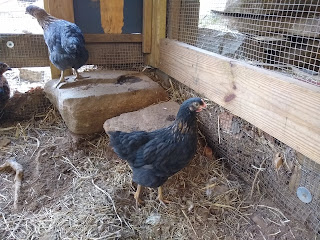 They’ve also started trying to fly out of their coop playpen. Which is bad as the big chickens live in the other side of that coop. I’ve put up soft fencing to keep them in but it’s obvious that it’s just going to get worse as they get older. Time to figure out how to handle accommodations until they’re big enough to integrate at about 14 weeks.


Total COVID-19 cases:
Temperatures really climbed this week and we got a lot done. I cleaned the coop, moved compost piles, relocated the chicks, cleaned the house, planted the kitchen garden with herb seeds, and started to harden off some of my starts.

Chris bought a 270 gallon tote and set it up to collect rain off the coop roof. We’ll use this to water grass and gardens. Nice! He also spread the rest of the topsoil we’d bought and finished his work on the bridge. I’m now up for adding the screens. Then we’ll be bug free up there. Woot!

Food this week mainly focused on turkey leftovers but I did manage to add in a Toll House pie and 4 loaves of cinnamon swirl bread. Oh, and a batch of spicy mac & cheese.

And now for a gratuitous picture of Noodles enjoying her nap.

How’s that for a blog title?

Today was gorgeous-sunny, breezy, slightly cool. The perfect day to completely clean out the chicken coop and run after a long winter of deep-littering. The bonus would be being able to move the chicks out of the house (finally) and into the coop.

So I spent about six hours shoveling poop-heavy hay and debris out of the coop and run. It was hot work and I wore my homemade mask. It worked a treat. By the end of the day I was filthy and tired. But I was also deeply content. It had been a productive and quiet day. The chickens kept me company. The dog and cats checked in frequently. I had to shower before making and eating lunch with the full realization that I was just going to get dirty all over again.

Sitting and enjoying a cold drink after cleaning up for the final time, I realized that attitude makes all the difference. This could, literally, have been a shitty day.

Instead it was wonderful.
Posted by Cr at 6:46 PM No comments: