We have officially started on the kitchen cabinetry. This is a huge deal for us - we've been in the house 3 years and I've been using the time to figure out exactly what I want for kitchen layout, cabinetry, and maximum functionality. We've obviously been working on lots of other projects during this time and the kitchen finally worked its way to the top of the list.

The wood that we cut into boards is now dry and ready to be worked. Chris opted to send it to a local mill rather than planing it himself. Well worth it! Cost only $100 to get a truck load of wood planed smooth. And given that about half of it was ash (a super hard wood), we probably saved nearly that much in blades. Okay, not that bad, but it was still worth it.

Next we finalized the design of the sink cabinet and Chris got to work building.

We once again used the carport for assembling the cabinet carcass. It's been great having that available for extra work space.

I kept busy nearby so that I'd be on hand if he needed, well, a hand. I'm spray-painting a set of old sewing table legs. They were heavily rusted so I had to do a bit of scrubbing with the wire brush and steel wool first, but they cleaned up great. Not positive how I'm going to use them yet, but they look cool in the meantime.
I wanted a wood plank countertop and we spent some effort figuring to how to stain it. Ended up using vinegar and steel wool to create a stain then using mineral oil to finish it. We created the stain (1 steel wool pad left in 4 cups of white vinegar) and then used it on a story board to see how many days we wanted to let it cure before using it.
This is an ash board (same wood as I'm going to use for the countertops). Far right is just oil, no stain. Then, moving left, 3-day aged stain with 1 coat then 2; 5-day aged stain, 1 coat then 2; and 7-day aged stain. The stain got more red the longer it sat in solution. I really liked the more black stain so a 3-day solution it would be.
Once the carcass was built and the countertop was ready, Chris disconnected the sink that I'd been using for 3 years and moved it out to the garage where it belongs. Of course this meant I'd be doing dishes in the garage until we could get the new sink moved and connected.
Moving the new cabinet into place was no big deal. Love the French front doors! That wide opening makes it really easy to move things in and out.
Then we moved in the new countertop.
That was heavy. Chris built it in two pieces so he could more easily adjust for the new sink. He'd be able to custom cut the basin hole and the support holes if everything was in place.
He built a caliper out of scrap lumber to make sure he had the sink basin dimensions correct and then got to work cutting into the newly created countertop.
We had two guys help us move the extremely heavy antique porcelain cast-iron sink into the kitchen and we put it up on blocks so it hovered over the counter. Then Chris wedged himself into the cabinet to cut out the holes for the extra sink supports. Not sure if you've ever looked underneath an antique sink like this, but there are knobs and fins and protrusions that allow many different mounting options. Made it tricky to put on a flat counter.
Since the sink was still hovering, it was easy to stain the countertop in place.
When you put the vinegar/steel wool stain on initially, it looks like nothing. Just kind of wet. But 15 minutes later, it's darkened to this.
Here's the thing with natural, non-commercial stain. You're never sure just what it's going to do.
Remember how I liked the black stain best? And how we therefore very carefully timed the solution to match? Yeah. This isn't black.
Apparently this particular batch of boards has more tannin in it than the story board did. A few areas are blackish, but mostly it's red. Which raises the question what's going to happen to the rest of the counters as we build them? And before you say we should have done them all at one so that we had a consistent batch of stain, know that it wasn't the stain - we did yet another test board before doing the countertop and it came out black too. So we merrily went on to stain the counter and BOOM! Red.
It actually looks a bit like walnut once it's oiled, so not really a bad thing. Just surprising given all the testing we did.

Am I worried? No. There are black areas and we've decided to let the next batch of stain age 5 days to purposely get a more red result just to try for some level of consistency. But really, it's hard to argue with what the wood wants to do. We'll just accept that nature sometimes throws you a curveball and move along.

I'll have another post soon on the finished sink area and plans for turning the corner to the stove.

I've been seeing lots of pictures of chicken jungle gyms on Pinterest lately. I love this idea, especially for winter. Give them something to do and hopefully they'll peck each other less.

And do I think they'll actually use them?

Yes, yes I do.
And do you notice that there is inevitably one chicken giving me the stink eye? Don't believe me? Check out that first photo again; it's the one in the bottom left corner.

Chris is getting ready to start my kitchen cabinets and figured it'd be a good idea to organize the garage woodworking shop before starting.

So everything got pulled off the metal shelves and mounded into the middle (and out in the driveway and in the carport). It made a heck of a mess.

Then he mounted the wood storage racks on the south wall, rearranged the drill press and tool boxes, and installed the dust collection system.
Finally he moved the metal storage racks into the middle of the garage between the small and large bays. This effectively split the garage into a wood shop (large bay) and car shop (small bay).

Once the house is done he'll start working on the hobby truck again. In the meantime, the shop is organized and it's much easier to work on large projects. Like the kitchen.

Felt like having a substantial breakfast this morning so started looking for savory scone recipes. Ended up getting inspiration from two on-line recipes combined with the sweet scone recipe I typically make. Here's what I came up with:

Preheat oven to 375 degrees.
Whisk together flour, salt, and baking powder in large bowl. Add grated butter and shortening, cut into dry ingredients, leaving pea size pieces. Toss in cheese, onion, and bacon.
In small bowl, combine eggs and milk. Add to dry ingredients - use a rubber spatula to gently work mixture until mostly combined (there will be some dry flour left in the bowl).
Turn out onto lightly floured surface and gently bring together into roughly a 3 x 10 inch rectangle. Cut into 4 squares then into triangles for a total of 8 scones.
Place on parchment lined half sheet pan, leaving at least an inch between each.
Bake for 25 minutes and remove to rack to cool slightly. Serve warm.

Some notes:
You want 3 ounces total of cold fat - I like the combination of butter and shortening as I think it makes a tender scone.
Don't overwork the dough at any stage else it'll get tough.

These really came out great. The cheese melted at the edges to form a salty crust and the onion was just a hint of flavor, not overpowering at all.

All summer we've been slowly working on the old camp area. When we bought the property there was a deep hollow in amongst some trees. The hollow was the caved-in foundation of a burned-out camp. Well, actually a wee house as it was lived in full time. As this was the sunniest spot on the property we decided to make it the future garden area.

Over time we've harvested the trees (one of which is destined to be my dining table), leveled much of the land, and created garden space. The coop is up there, we'll be adding fruit trees to the North end, and we recently found a great section of basement foundation that we want to turn into a pit greenhouse. Much to do and it's all very raw at the moment.

In an effort to actually start to develop good soil we bought some winter seed to amend the soil. Green manure is typically a mix of winter rye, field peas, crimson clover, and similar plants that you plant in late summer/early fall. Then, once it comes in, you either let it die off for erosion control or till it into the soil while still young to help fix nitrogen and provide nutrients for next spring's crop.

We missed the planting deadline for the full mix so just purchased winter rye. We also bought some hay as crop cover. Normally you don't want hay since it still has seed heads which can weed up your soil, but since we're tilling this in anyway it shouldn't do us too much harm.

You can see how dry and barren the soil is. It needs help.
Now, while the seed quietly does it's thing, we decided to enjoy some of the gorgeous fall weather and carve a pumpkin. Cooper and the chickens helped.

Email ThisBlogThis!Share to TwitterShare to FacebookShare to Pinterest
Labels: Chickens, Garden, The property

Last Spring I threw old seed around in the chicken garden fully intending that anything that grew would get fed to the chickens. I frankly didn't expect anything to grow. I also transplanted some corn when Dad thinned out his corn plot. Didn't expect that to grow either.

I was proved wrong.
The corn didn't do all that well, but it did form ears and many of the ears had kernels. More importantly, they were excellent - tender and full of flavor. The chickens got a few malformed ears but had to settle for the cobs from our cooked corn for the rest. Not that they minded. They actually seemed to really like picking over the cooked cobs.
Out of the scattered seed, peas, acorn squash (both green and white), and watermelon grew. We managed to harvest two melons.
Unfortunately, since we'd never tried to grow watermelon before (and because I didn't keep track of types, germination dates, nor days to ripen) we picked the biggest one too soon. Still tasted like a watermelon, but more tart.
The chickens loved it. 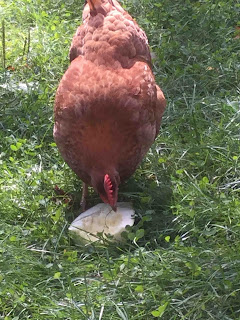 They also liked the smaller one that we let go too long.