Chris made me a broadfork! In case you’re unfamiliar, a broadfork is used to break up and aerate soil without actually tilling it.
Given that “real” broadforks cost way more money than we want to spend, Chris decided to construct one. He took the handles off a broken hand-truck, the tines from a small York rake, and the bar from same. The tines were arched and about an inch wide, too wide to easily cut through the soil. So he was going to cut them into more of a blade until he hit on the idea of twisting them. So out came the mini-forge, the anvil, and the torch.

Once he got it all welded and bolted together I gave it a try.

Admittedly, I put it onto fairly light soil, but it worked a treat. I think it’ll be great this fall in the garden.
My corn is looking awesome and I’ve actually got some tasseling. It’s nearly over my head already.

The greenhouse tomatoes and peppers are growing well. No flowers on the peppers yet, which surprises me. The cherry tomatoes are fruiting and climbing like crazy. I’m training them to the trellis but am not sure the fruit will dangle. It seems to want to head upward. We’ll see.

My zucchini plants are now producing full size zukes and we’re getting creative with our use. Chris even made zucchini spears on his own (this is a big deal-he doesn’t usually cook). Just cut zucchini into spears, coat with egg, dredge in seasoned Parmesan, and bake for 20 minutes or so. Came out great.
I’ve got to get out there and take a full photo spread of the gardens. It’s nice to have pictures to support your recollection of what the space was doing. Maybe tomorrow morning during my weeding time.
Posted by Cr at 6:50 PM No comments:

This is my third flock of chickens, but my first experience with a rooster. I had no idea the shenanigans he would get up to. Nor did I know how quickly he’d start them.
He’s only 15 weeks old. 15! And yet he’s already grabbing the girls neck feathers and trying to mount them. They, also being only 15 weeks old, want no part of this. So they scream. Loudly. The first time I thought a fox had got one. Nope; just Carl.
Oddly, he makes zero effort to woo the older hens that would be all too willing to entertain a strong young stud. At least I assume they’d be willing as they squat and quiver at the least encouragement. Basically, wave a hand over one and she’ll assume the position. Maybe they intimidate him?
I’ve requested a Storey’s book on chicken raising from my library. Hopefully it’ll provide some insights.
Posted by Cr at 7:59 PM No comments:

We installed a temporary safety railing between what was originally the loft room and stairwell when we first built the house. It stayed that way for a few years until we installed the hardwood flooring at which point we took it down and, um, never bothered to put it back up. Ahem. Please note we don’t have kids! And despite my SIL’s fears, we never wandered off to fall to our deaths during the night.
Anyway. It was finally time to install a permanent railing. Just as with the bottom stairwell wall we used a mix of woods and painted goat panels. Cherry for the end posts with a satin poly finish; semi-solid black stain on the two pine posts and the ash framing; burned ash for the cap (literally burned-we used a propane torch on it). All of the wood came from the original logging of the property. So cool. 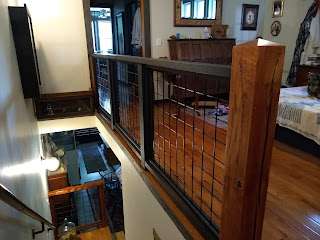 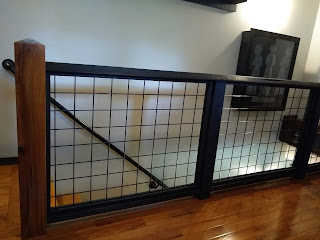 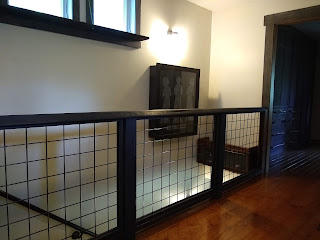 It’s hard to see the ash cap. It’s got a live edge and looks great in person. I’ll try for a better photo.
Posted by Cr at 5:13 PM No comments:

A Tale of Two Flocks

The big day. A day of portent. A day of trepidation. A day that was surprisingly anticlimactic.
Shortly after Carl announced the coming sunrise (he misses by a good 20 minutes each day. And he’s always early), I scooted up to the coop to let out all the birds. I’d put up a divider and netting so that the old flock could see the new girls but no one could actually interact. That was a full month ago and it was finally time to merge the groups.
I’d done a bit of reading and several people suggested having a good distraction when the two flocks first meet. I figured sunflower seeds would work and scattered a generous helping around the pasture in front of the gate.
It worked well. They all ate and pretty much ignored each other. At least until Carl (barred rock) met Tso (small black sex-linked). A wee bit of chest bumping and Carl retreated.

A few more scuffles as the seeds disappeared and then everyone went their own way.
Really, it was super calm. Bunty chased a few pullets around the pasture but everyone else just got on with chicken stuff.
I kept an eye on them throughout the day, letting the old flock out of the pasture to free range while keeping the youngsters inside; closing the oldsters back in so they could get to the nest boxes; just making sure everything was okay. And eventually watching everyone go in to roost at night. The babies are still sitting on the interior pop door stoop rather than using roosts which only matters as that totally blocks the door. Bunty had to force her way through them to get to the roost. Chickens scattering everywhere! Inside! Off the ladder! But it calmed back down, the other ladies made it inside, and all is secured for the night.
We’ll see how they all do in the morning. I’ve left a bowl of food out in the run and the feed tube in the coop is full as well so they’ll have multiple places to break their fast. Hopefully that’ll keep things calm until I get out there to open up the exterior pop door.
Posted by Cr at 9:28 PM No comments: